It’s been a year-long journey for Gautom Menon’s rum brand Wild Tiger Rum since it first hit shelves abroad. Drinks & Destinations decides to catch up with the man behind India’s first premium rum ‘Wild Tiger’ and find out more. 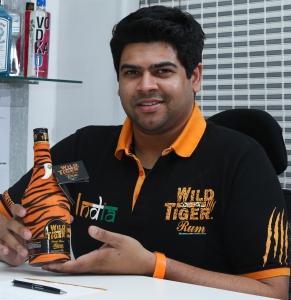 Are you happy with the journey of Wild Tiger so far?

The first year has been all about getting the word out there, finding the right distribution partners in each region or country, the proper route to market and of course learning quickly from mistakes. And I have to say that we are very much a “cub” at this stage that’s On the Prowl. The media coverage does seem humungous and we are very thankful for all that’s been written and said about the brand in its inception year.

Which markets are you available now? And at what price points?

The price point in duty paid market is around $25 for the 700ml and $23 in Duty Free Travel Retail.

Rum to a common man evokes imagery of the Caribbean mainly, what has Wild Tiger done to educate consumers about Rums from around the world especially on Indian Rum?

We have been at trade shows across the world; New York, Berlin, Madrid, London, Miami to name a few and the one thing we are proud to talk about is the India provenance factor. Consumers are fascinated to learn that the earliest origin of Rum is from ancient India and it’s from here that sugarcane spread to the west. We also let them know that India is the largest producer and consumers of Rum in the world. Armouring the consumer with information pertaining to historic significance is as important as talking to them about the liquid in the bottle. And personally I have poured samples to over 17000 consumers over the year. With full conviction I can say that the number one USP for us is neither the fancy packaging nor message of tiger conservation but the fact that it’s a proud produce of India. I truly believe that Rum is the True spirit of India, and it’s India’s answer to what Tequila is to Mexico and what Bourbon is to America.

The word “premium” is over used and misused by many producers, how does Wild Tiger justify the tag of “India’s first Premium Rum”?

This is a question we have been asked many times by Rum experts and bloggers. Wild Tiger is an exquisite blend of both distillates; predominantly molasses which is aged in charred Oakwood barrels and we further blend it with a some percentage of cane juice distillate. This blend is not very common in Rum as most Rums are either 100% molasses based or 100% cane juice based like Agricole and Cachaca.

Each bottle is carefully hand packed by women workers, it’s a laborious and time consuming process and we have mainly used recycled materials for this. Moreover just like every Tiger every bottle of Wild Tiger has unique stripe design, and this makes it a special edition by default, a great gifting idea or collectible. Many producers would call this super premium but we shall save that for a later variant.

What’s in the pipeline? Any new variants expected in 2017?

We have been working on our Spiced Rum ‘WILD TIGER INDIA SPICED RUM” which is now Ready to Roar. Surprisingly it’s India and Asia’s very first Spiced Rum. It’s made with exotic spices that India is known for, specifically Kerala state. It’s 100% natural and the feedback we have had from previewing at trade shows in Europe recently have been very promising.

We are also working on a rum based Ginger Liqueur, this is mainly targeted at China market and as a digestif.

In terms of new markets, we are likely to add one new country a month at least over next 2 years, however in 2017 we would like to focus and ensure that the product is available not just sporadically but extensively in each respective markets. We have the best partners possible representing the brand in respective territories who think of the brand as their very own, and this gives us immense hope to do great things.

What are the plans for Duty Free market?

Duty Free segment is a different beast altogether, also known as the 6th continent. It has its own great scope and yet has many challenges. Wild Tiger is very much a cub in this sphere too. But we are very proud of the fact that its emerged as a best seller on board Tiger Air even outselling some iconic brands like Black Label and Absolut, as a result of that we find ourselves to gain a listing soon with Virgin Atlantic, KLM, Jet Airways to name a few, also there are plenty of great conversations on going with Land based Operators and Cruise liners across all continents.

Currently the product retails at three airports in India including Bangalore, Chennai and Kolkata and also in Fiji duty free. Watch this space, we are very serious about establishing Wild Tiger as a key player in this segment.

Can you tell us more about “Think out of the Bottle” initiative?

Wild Tiger is a young brand but everything we do is done keeping in mind this mantra “Think out of the Bottle”. Innovation and Social responsibility are at the heart of every decision we make and implement. Even if you notice our design, creatives, POS and displays, all of it is very bold and cutting edge. Many times we have been asked if this was a work of a leading creative design agency, but the truth is everything has been done in house, it’s been unrelenting work and a work in progress and we have got here only by making mistakes and correcting them.

What would you say to make a whisky or brandy drinker sway towards Rum?

A good Rum offers a lot more than a great Whisky or Brandy ever can. I’m glad you didn’t bring Vodka into the question.

If you think about it, sugarcane has far more organoleptic character than any other raw material. Rum is made in more than 85 countries and each bringing its own back-story, production nuances and skill into it, there is so much diversity in Rum unlike any other category of Spirit. It’s so versatile as a spirit that most Iconic cocktails use Rum as the main base and there must be a reason for it, and that reason is because Rum is Aromatic, Flavorful and truly Rumtastic.

How is Rum best consumed ? And what is the perfect Wild Tiger serve?

I always say Rum should be had however one likes it. I normally prefer to have it neat first as a taste and then pour half part of water to open up the aromas and palate. Wild Tiger is best with a dash of water, having said that we have curated two signature cocktails ‘On the Prowl’ and ‘Eye of the Tiger’, they are simply relishing and we aim to promote it a whole lot in 2017.

We have completed registration of our non – profit ‘Wild Tiger Foundation’ and also developed the website. As far as contribution is concerned we are soon donating solar powered torches for anti poaching watchers at Sathyamangalam Tiger Reserve. As you can imagine with any start up venture profits in the early years are almost unlikely but we have managed to earmark some funds, we also await for a few payments from our initial orders. The aim is to kick off a sustainable project starting in March.

But from an advocacy point of view we have added pressure on brands and organisations who so far have turned a deaf ear to social responsibility despite them using a particular animals name and imagery in their logo and communication. We at Wild Tiger Foundation (WTF) have some elaborate plans for the future in terms of cool merchandise, celebrity endorsements and some viral initiatives.

Like I said we are very much a “cub” at this stage, but the plans are in place to get this Roaring, Bigger and Louder in 2017. It’s tremendously exciting to put brand India and brand Kerala at the fore of everything. It helps that we are incredibly passionate about Rum and Tigers too, very much looking to the year ahead.

Also here’s wishing you and your readers a Rumtastic and Roaring New year.

Drinks & Destinations is all about news, views, podcast, and stories from the world of drinks, travel, and hospitality…served just the way you like it. Rojita Tiwari is an independent writer, trainer, and consultant in the fields of wine & spirits, travel & hospitality. She is a WSET Level 3 certified (Wines) and Level 2 certified (Spirits) professional listed twice (2013 and 2015) as one of the TOP TEN WOMEN OF WINE IN INDIA by the Indian Wine Academy. With 16 years of experience of working for several publications including a decade-long experience of heading the editorial of a leading alco bev magazine, now she is mostly busy- tasting, traveling, writing, training and educating people about the wonderful world of wine & spirits. She is a certified judge at several international wine & spirits competitions. She also hosts India's first podcast on drinks and travel - The Drinks & Destinations Podcast. Tweet @rojitatiwari or connect with her on drinksanddestinations@gmail.com Cheers & Happy Reading! View all posts by Rojita Tiwari

One thought on “The Year of The Wild Tiger”