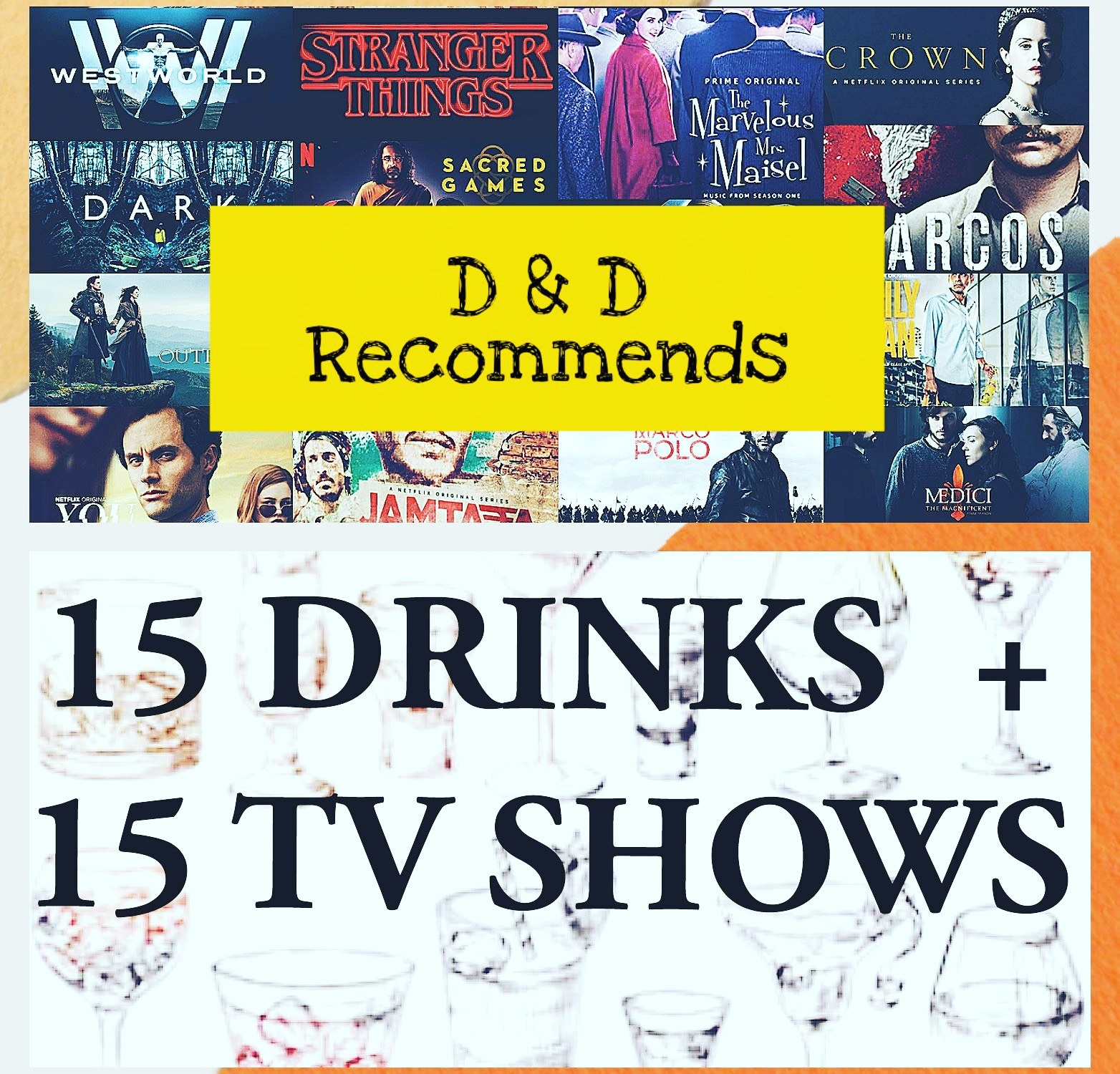 To help you cope with these uncertain times of lockdowns and unlocking we recommend these drinks that pair well with some popular TV Shows. Let’s sip, stream & chill.

Amidst this never-ending lockdown season the unwinding time is limitless. While platforms like Netflix, Amazon Prime or Disney+ Hotstar has the best series lined up for you, we are offering you a guide to pair some of those series with the best-suited drinks.

Remember Cersey Lanister and her royal chalice of wine that seldom parted her lips throughout the popular HBO series Game Of Thrones? Let’s find some drinks to give you company while streaming through these handpicked shows.

The bittersweet story line of this Hotstar science fiction series switching gears from a game world to the reality can only be handled if you have the company of a Negroni cocktail. The Delos farm is no place for the faint hearted with cowboys carrying guns and pretty countrywomen with penchant to find them amidst grave danger. This drink will certainly help you travel smoothly between dream and reality of the Delos Farm without any violent endings.

For 3 seasons now this series on Netflix has been keeping us on the edge of our seats with an engrossing storyline, a sinister secret lurking in the depths of a government lab while a bunch of kids try to solve the mystery around by helping a young Will who is stuck in a parallel world. To maintain sanity and keep you alert while watching Stranger Things we recommend you to grab a pint of beer.

Listed amongst the TOP 10 shows in India, DARK raises so many questions for the time travel fans. If you have always been one of the believers, this series will be a whirlwind ride for you. Traveling from 2019 in the past and future. With the suggestive storyline of an apocalyptic situation set for June 27th, 2020, we say grab some cider to calm those nerves and enjoy this series.

If you still haven’t watched this series now is the time. Sacred Games is an Indian web television thriller Emmy Awards nominated series based on the book by Vikram Chandra. While the undertone is about the ‘doomsday scenario’ this is one of the must watch shows for the sheer complexity of characters played by some brilliant actors. We think wine would be a safe pairing for this.

Outlander is one of the longest running series that is probably going to end in the 6th season. Currently 5 seasons are available on Netflix showcasing another time travel, but romantic drama between a traveler from Boston in the 20th century and a Highlander in Scotland from the 17th century. The twists and turns in this drama series are filled with folklores, love affairs, wars and revolutions in the backdrop of some major historical happenings that shaped two continents. Enjoy this one with a dram of whisky Scotch or American whiskey, the choice is yours.

It’s official. The professor is the most popular character in the current generation of actors on any TV series. This show is no 4 on the Top 10 list in India. The mastermind of a serious crime (robbing the Bank Of Spain) with his criminal associates makes this the top heist series of all times. Watch all 4 seasons on Netflix with a glass of Brandy or Port wine or a nice bottle of Spanish wine from Rioja.

The devilishly charming yet brutal sociopath who seems like the wrong kind of right that many girls dream of and is highly discreet of his affairs. And, YOU wouldn’t want to be lost in his world. But if and when you do, we suggest that you sip on a glass of Pinot Noir wine.

This Netflix series set in small town India garnered popularity because of its original storyline depicting the con artists and fraudsters involved in phishing scams. The raw colloquial plot with highly intricate character detailing leaves one wanting to sip on a drink like Gin & Tonic while watching Jamtara – Sabka Number Ayega.

This is one of the most entertaining comedy drama shows available online right now. And, Mrs Maisel is every woman’s ideal character. She is smart, gorgeous, intelligent and extremely witty. A rich Jewish woman stand-up comedian whose witty humour we think can only be complemented by the elegance of a classic champagne or a complex Prosecco or any other sparkling wine that you can get hold of.

The British Royal family has been the talk of the world for centuries and many times the aristocratic lifestyle; political influences of the royals and their reputations have been smeared with controversies. This particular Netflix series presents the Queen’s relations with the royals and her own country. Royalty deserves something exquisite such as a delicious red wine.

The true story of Colombia’s infamously violent and powerful drug cartels fuels this gritty gangster drama series highlighting the life of Pablo Escobar. This successful series has made Escobar a kind of household name in India. With already 3 seasons out on Netflix this thrilling drama is here to stay for a long time. The series plot spans from South American countries to Mexico, making it only best suited for our favourite drink a pour of Mezcal or Tequila.

In the world of Spy Series, Homeland has one of the most interesting story lines based on the life and struggles of the American Spy character Carrie Mathison. This packs suspense, drama and some real spy game. We would recommend sipping on a few glasses of A smooth and elegant Merlot wine so that you don’t miss a single moment while sailing through 8 seasons of the series.

The Family Man is an Indian action drama web television series with a well made story interweaving characters of an Intelligence Officer out to foil terrorist attacks on Indian soil. Manoj Bajpayee as Srikant Tiwari, a middle-class man serves as a world-class spy while trying to balance his familial responsibilities with the demands of the highly secretive special cell of the National Intelligence Agency that he is working for along with a strong supportive analyst JK Talpade played by actor Sharib Hashmi. Pour yourself some rum and coke and enjoy this engaging tale.

Who doesn’t like a short lesson in history! Especially when it’s all about the ancient trade routes of the Silk Road and a lost Merchant of Venice and his son Marco Polo who found a home with one of Mongolia’s greatest emperors Kublai Khan. This is a window into many civilizations and what better way to enjoy this series than drinking some Chinese white spirit Baijiu.

The lockdown season may have dampened the spirit of the traveler folks, but virtual tour of one of the most iconic tourist destinations in the world is just a click away. Who doesn’t love Tuscany? Rolling hills, cypress trees, and idyllic countryside, watching MEDICI will take you to your favourite destination. Get transported to a time when the richest banking family in Europe, The Medici called the shots. This historical drama set in Florence and other prominent places around such as Montepluciano occasionally shows the family’s love for their vineyards and wine. It is only apt that you choose a few wines from the region to go along with the 3 seasons of Medici.

(All the above mentioned drinks brands are available in India)