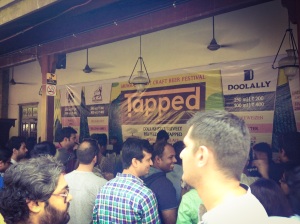 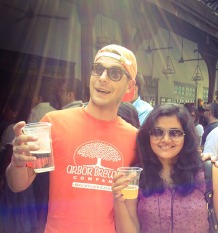 In the last quarter of 2014 there were two interesting events that took place in Mumbai. The first Craft Beer Festival called TAPPED (on 2nd November, Wodehouse Gymkhana, Mumbai) and the 5th Bandra Wine Festival (on 15-16 November, D’Monte Park, Bandra, Mumbai). Both were consumer centric events organised with the sole purpose of popularizing drinking culture in the country and in the process to make some money for the organisers. The craft beer festival was a collective initiative of some of the craft beer producers based in Mumbai, Pune and Bangalore where as the wine festival was a third party venture. The spirit and passion in which this bunch of brewers organized the event truly speaks of the transformation of the beer culture in the country. TAPPED was a testimony of that. Though this, in no way, means that the wine producers are less passionate or not dedicated enough towards what they do. But what seems to be missing so far is a collective effort that could drive them to create a better, conducive environment for the growth of the wine industry. In India, the craft beer culture kick started in 2009 with the launch of Doolally, the first microbrewery in Pune. Founded by Prateek Chaturvedi and Suketu Talekar. Following which a number of microbreweries cropped up in Bangalore, Gurgaon and Pune. Mumbai got a taste of it in 2011 when three young, passionate professionals (Navin Mittal, Krishna Naik and Rahul Mehra) decided to launch Gateway Brewing Company (GBC) at a time when the first official brewpub in the city, The Barking Deer (founded by Greg Kroitzsh) was still waiting for a brewing license. The brewpub got the license to brew on premises in October 2013 after almost 3 years of constantly battling with the legalities to set up a brewery in the city. GBC set up the brewery in Dombivli and managed to sell their beers at a number of bars and restaurants in the city. According to the brewers, the state government did not even have a law in the first place to guide them or to let them brew for which they had sacrificed their well paying jobs, time and energy. After years of persuasion, long hours of waiting, doing many rounds of the excise and BMC offices and to an extent, actually helping the officials in forming a new law, they finally won the battle. Though things were much easier for the brewers in Bangalore and Gurgaon, this new breed of brewers somehow worked together exchanging technical know-how, skills; they even shared their brew masters and above all are constantly there for each other. So when they decided to put up a show this year, this group of enthusiastic brewers came together and created something unique. The Bangalore based microbrewery, Arbor Brewing Company, which does not have the license to sell its beers in Mumbai, tied up with Gateway Brewing Company and produced a special beer called BomBalore (an apt name for a Bombay, Bangalore JV). “We had to import four varieties of hops from the US for this beer and it was expensive, but we are happy that the beer has got such a phenomenal response at the festival,” said Gaurav Sikka, MD, Arbor Brewpub. Behind Pune’s Independence Brewing Company, the year old microbrewery, are some really interesting people too. A venture by Avanish Vellanki (based in California, Shailendra Bist and Greg Koch), when it took really long for IBC to get the brewing license, they started serving beers from GBC. The GBC beers are still available on tap alongside their own beers from the microbrewery. And interestingly, Riday Thakur, a partner of the beer importing company, Yeast India Co. was actively involved in organizing the craft beer festival. They all have one thing in common, the passion to brew good quality and authentic beers without making a dent in the beer drinker’s pocket and the collective interest in developing craft beer culture in the country.

On the first day of the 5th Bandra Wine Festival, the venue was swarming with visitors. There were too many counters at the entrance, the process was confusing, the place was crowded and most of the visitors did not have a clue about what was going on.Figuring out registration, the hand bands, the coupons, locating the PR person and finally entering the event took some time. 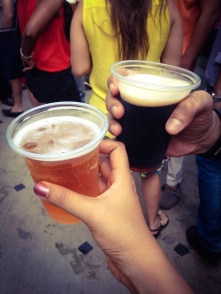 The total area for the festival had shrunk this time though there were some additions to the wine and food stalls. Constructed prominently in the center was the stall of the liquor retailer Living Liquidz (which also happened to be the sponsor of the festival) serving wines only from their portfolio, the range of Moksh, Raaya and other labels. That was also the only stall serving wines in wine glasses instead of the plastic glasses, which were used by the other wine companies. Sula, Grover Zampa, Charosa, Nine Hills, Fratelli, Good Drop, Reveilo, Chateau d’Ori, Turning Point, Myra, Riona, Fusion, Rhythm, Pause, Oakwood and Silk Route wines, by normal standards, a good number of wine companies were present at the event. Interestingly, I was told that there were a number of withdrawals few weeks before the event and many participants cited reasons such as poor turn out at last year’s event and high stall prices etc., however, the situation was salvaged at the last minute when some of the wine producers took the matter in their hands. These were the members of the newly formed IGPB Marketing sub-committee. Though this committee was formed two years back as a part of IGPB (Indian Grape Processing Board), it sprung into action in April 2014. The 13-member committee, to brand itself as ‘Wines of India’ currently includes Sula, Reveilo, Grover Zampa, York, Vallone, Good Drop, Pernod Ricard (Nine Hills), Fratelli, Chateau D’Ori, Turning Point, Charosa, Fusion (Kiara) and Myra. However, with just 13 wine companies as members of this committee, it does not really represent the entire wine industry. According to Ashwin Rodrigues, owner, Good Drop Winery and the person spearheading activities for the committee at the moment, “Marketing poses the biggest challenge for the wine companies at the moment. With retailers’ scheming the ‘one plus one case’ strategy, wine producers are left with no choice but to mend themselves. At the moment supply exceeds demand and the wine producers are forced to offer discounts to the consumers and ultimately they are not left with any budget for marketing”. The committee is creating various marketing plans for the member companies to promote the wines through several events. It may be a good start. But with no rules, regulations, appellations or production guidelines in place it is going to be difficult to achieve uniform growth for the industry in the near future. There is still no single-point information center for the wine industry when it comes to annual data and other factual details. Karnataka is emerging as a better quality wine-producing region and the Karnataka Wine Board is leaving no stones unturned to support the wineries in the state. The Indian wine industry is growing at 15%-20% at the moment and many of our wines are winning medals and accolades in several international platforms. Some are rejoicing this newfound love for Indian wines. However, until the industry joins hands to create a momentum with the sole agenda of improving the quality, sustainability of the wines, vintage after vintage, working towards building a constructive wine culture in the country, looking beyond individual interests, I would say, lets just keep that champagne on ice for the moment!

Rojita Tiwari is an independent writer, educator, podcaster, and consultant in the fields of wine & spirits, travel & hospitality. She is the recipient of the Most Influential Food & Beverage Industry Professional Award 2020. Rojita is a WSET Level 3 certified (Wines) and Level 2 certified (Spirits) professional listed twice (2013 and 2015) as one of the TOP TEN WOMEN OF WINE IN INDIA by the Indian Wine Academy. With 16 years of experience of working for several publications including a decade-long experience of heading the editorial of a leading alco bev magazine, now she is mostly busy- tasting, traveling, writing, training and educating people about the wonderful world of wine & spirits. She is a certified judge at several international wine & spirits competitions. She also hosts India's first podcast on drinks and travel - The Drinks & Destinations Podcast. Connect with her on drinksanddestinations@gmail.com or Follow on Instagram & Facebook @drinksanddestinations. Cheers & Happy Reading! View all posts by Rojita Tiwari